Why Are Difficult Conversations So Difficult?

The Art and Science of Influence

“Ideas are the currency of the twenty-first century. The ability to persuade, to change hearts and minds, is perhaps the single greatest skill that will give you a competitive edge in the knowledge economy – an age where ideas matter more than ever,” says Harvard University instructor and Wall Street Journal best-selling author Carmine Gallo, President of Gallo Communications Group. I don’t disagree.

As a leader, your ability to influence and persuade others is more important now than ever for a number of reasons. Organizations are becoming less hierarchical and “because I told you so” doesn’t work, especially in today’s war for talent. Companies have increased their reliance on external contractors. Cross-functional teams are more common as organizations aspire to be agile in a rapidly changing environment. And organizational growth requires more cross-functional collaboration to sustain quality and performance, just to name a few.

So how does one effectively lead in this environment? The key is to generate trust by considering both the art (philosophy) and science (psychology) of influence.

The Art (Philosophy) of Influence

The art of influence can be traced to the 4th century BC when the Greek philosopher Aristotle developed his “equation of persuasion” which included three elements:

For someone to have the best likelihood of persuading an individual or a group of people, Aristotle argued that these three elements should be leveraged in unison. In other words, effective influencers speak from a position of character and credibility, and they appeal to others through a combination of reason and emotion in order to shape their perspectives, feelings, beliefs, goals, and/or actions.

The Science (Psychology) of Influence

The emotional element of persuasion that we just discussed is a good segue to the science of influence, or the psychological foundations of persuasion which are rooted in behavioral science and behavioral economics. Robert Cialdini, author of the New York Times best-selling book Influence: The Psychology of Persuasion, says, “Persuasion skills exert far greater influence over others’ behavior than formal power structures do.” Based on his research, Cialdini lists six principles of effective persuasion:

Diving deeper into the science of influence, it’s also important to realize that the human brain is addicted to being right, and avoids threats of being wrong. Under threat or stress, cortisol floods the brain – shutting down advanced thought processes like strategy, compassion, and trust. This causes us to enter protection mode from the shame or loss of status associated with being wrong, and this generally leads to one of four responses: fight (argue louder), flight (hide behind group consensus), freeze (disengage and be quiet), or appease (agree).

Bottom line, leading effectively through influence is highly dependent upon psychological safety. In fact, a 2012 study by Google revealed that an environment of psychological safety is the most important characteristic of a high-performing team. Coincidentally, the study was called Project Aristotle, which concluded that the top trait of a highly-effective team is an atmosphere where team members “feel confident that no one on the team will embarrass or punish anyone else for admitting a mistake, asking a question, or offering a new idea.”

Generate Trust Through the Influence Pyramid

By now you may be asking, “So how do you tie all of these concepts about the philosophy and psychology of persuasion together and apply them in an authentic way without being perceived as manipulative?” It’s a great question. I’ve found the following simple framework helpful when thinking about how to practically apply the art and science of leading through influence in a way that generates trust. 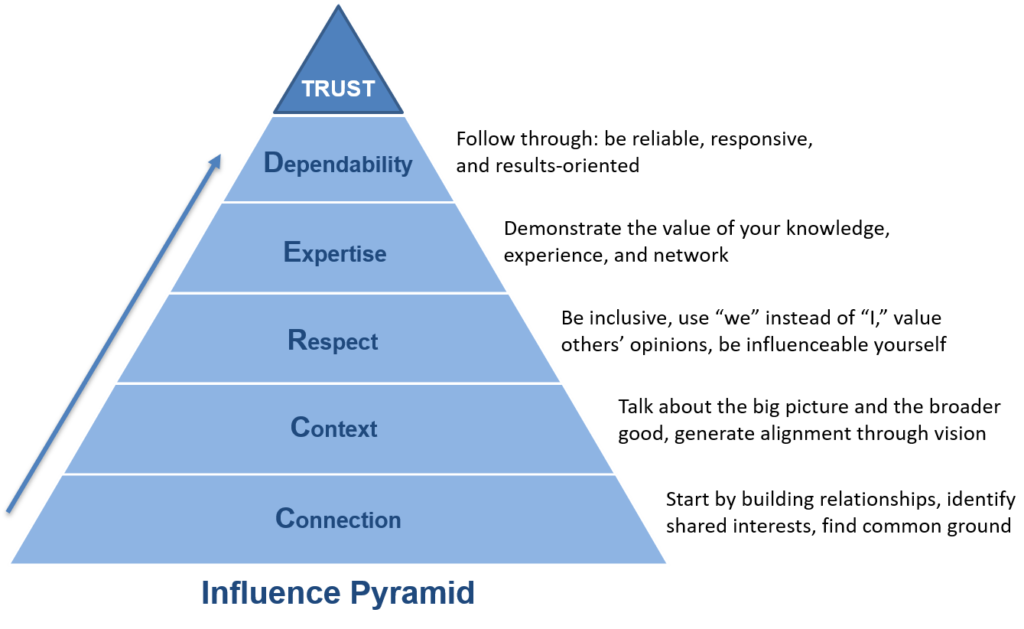 Relationships are the foundation of influence. Start by connecting with others by identifying shared interests and objectives, and finding common ground.

Next, establish context. Talk about the big picture and the broader good, and generate alignment through vision to help people see what is possible.

Third, show respect. Be inclusive. Genuinely value others’ opinions, and set the example by being influenceable yourself.

Fourth, contribute your expertise. Demonstrate the value of your professional knowledge, experience, and network.

Finally, be dependable. Follow through by being reliable, responsive, and results-oriented.

These five principles lead to trust, and trust is the key to winning people’s hearts and minds. By understanding the art and science of persuasion and then applying the influence pyramid, you’ll be well on your way to becoming a more influential leader.

To dive deeper on the subject of leading through influence, check out The Substance of Leadership: A Practical Framework for Effectively Leading a High-Performing Team. Also, take the five-minute Performance Pressure Test for more insight into how well you’re performing as a leader.